Once upon a time, there was a very talented young artist named Em Naughton.  Em had a lot more talent than she did money for veterinary services, and so we worked out a deal.  She did these for me more than 30 years ago, but they’re still good.

At that time, I was trying to get a brass quintet going.  We had all five instruments (two trumpets, French horn, tuba, and me), but could never get more than four of them to rehearsal at the same time.  I was playing the trombone part on my baritone horn (which is much like a euphonium, which is much like a horn that wants to grow up to be a tuba, but sounds like a trombone, range-wise).  I might have been able to recruit a trombone player, but then I wouldn’t have gotten to play.  And it was MY idea.

Brass quintets sometimes have cool names; sometimes the ensemble is very cool, but the name is pretty vanilla: St. Louis Brass Quintet, Canadian Brass.  Since we had such a hard time getting together and my instrument was a little non-standard, I coined the name Irregular Brass (nothing to do with digestion, thank you).

Em did this logo for me, and I put it on a T-shirt, which I still sometimes wear to Municipal Band rehearsal in the summer time.

I have always been a big fan of the Indiana Jones movies (at least the 1st and 3rd) and “Temple of Doom” hadn’t been out long when I asked Em to do this one for me.  While I hadn’t forgotten about it, it had been in storage for a very long time.  I once used it as “opening credits” for a video about the clinic that I sent to a management consultant.  Other than that, it’s been in a closet. Now it’s out in the open, or at least it’s in my office for my own enjoyment.

How much do I enjoy it? 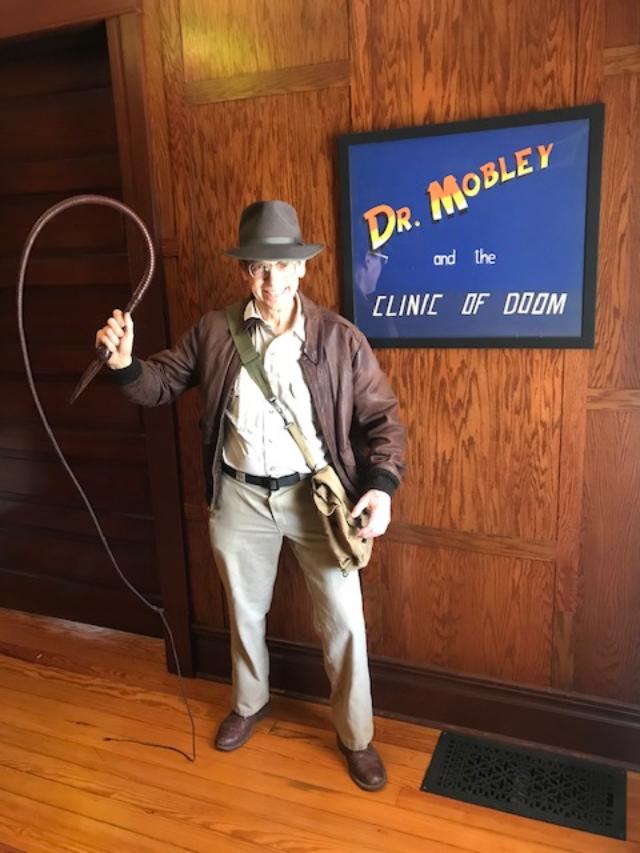 One thought on “Custom Artwork from the past”