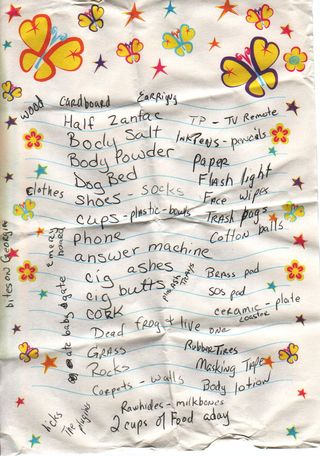 Today a client brought in this list of all the things their dog has chewed up… in the last 3 days.

The thing is, their dog is a 4-months old Labrador Retriever puppy.  He's eating a high quality puppy diet (read "rocket fuel"), so he needs a place to blast off and burn up some of that energy.  He's also getting his first permanent teeth in, so he has an even greater urge to chew than usual.

They do have a big fenced yard and another dog to play with, and they tell me after the play sessions he's tired enough that he's ready to plop down and sleep for a while, so that takes care of the exercise requirement — most behaviorists recommend at least 30 minutes of hard, aerobic exercise every day as the first prescription for puppy behavior problems.  He's getting that.

He needs to chew right now, and in addition to all their worldly goods listed above, they have provided some rawhides and chew toys.  They don't last very long with this guy, though.  They might do better with tougher toys, like the Kongs.

The biggest thing, though, is that the puppy needs something to DO all day.  When they are home with him, he doesn't destroy things.  When he picks up something that is not on the approved chewing list, they can easily redirect him.

The problem is that they are setting him up to fail.  He is left indoors, unsupervised, for most of the day.  They haven't provided him with something constructive to do, and no matter what they left for him, it wouldn't be enough.  With access to the whole house, they haven't prevented him from inventing his own games.  His inventions so far are pretty destructive,  not to mention dangerous: some of those things he's eaten could require a surgical remedy.

So don't set your dog up to fail.  If you can't interact with and supervise him, you need to confine him so that he cannot develop destructive and dangerous habits.  It seems a little tough to leave him in a crate or pen, but not as tough as getting exploratory surgery, or booted out of his happy home.

And give him something to DO.

One thought on “Dogs Need Something to Do”