This is Junior.  If he looks a little "out of it", then this is a really good picture.  Junior is a Bassett Hound, led astray by an old English Bulldog.  They both left the yard, but Junior got too far out into the street.  [What,no fence, you say?  Yeah, no fence.  "You pays your money and you takes your choice."…Charlie Allnutt ]

He managed to drag himself out of the street, but had trouble with his hind legs.  The folks rushed him to my office (at 9:00PM), and at first, things looked like he had a few scrapes on his face, but that his hindquarters were suffering.  By the time I got his rear end X-rayed, his pupils had become asymmetrical and poorly responsive – a cerebral concussion, with brain swelling on one side, is almost certainly the cause of that situation, particularly with a little road-rash on the head.  His hindquarter problem actually stemmed from his "headquarters". 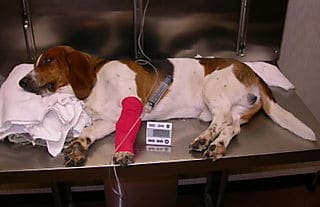 Here he is on I.V. fluids with his head elevated.  We used to fill these guys full of cortisone to reduce the brain swelling and give warm I.V. fluids to keep them from going into shock.  Turns out, the cortisone doesn't really help the brain swelling, and it may cause other problems, so that's a "no-no" now.  As for warm fluids, it turns out that you treat a bruised brain a lot like you treat a sprained ankle.  R-I-C-E = Rest, Ice, Compression and Elevation.  Instead of ice, you use cool I.V. fluids and try to lower the body temperature a little.  Sometimes you even go to the extent of filling the bladder with cool fluids to help lower the body temperature. Lower temps cause blood vessels to constrict, limiting leakage of fluids.  We elevate the head 30 degrees above the body so fluid doesn't want to pool just due to the force of gravity.  Rest is important, and some of these guys may require drugs to combat seizures.  The compression thing doesn't apply – no pressure wraps around the head [no tourniquets on the neck, either].  In fact, the skull will provide so much compression that the brain damage could be permanent if you don't reduce that swelling.  Keeping the blood glucose level up is important, as is plenty of oxygen. 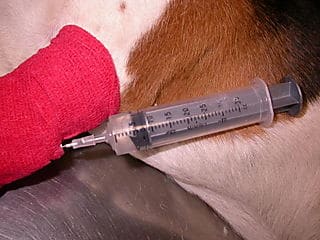 Mannitol is an osmotic diuretic.  It's such a big molecule that it pulls fluid to it and out through the kidneys.   This does more to reduce brain swelling than anything else you can do.  You have to give the dose slowly, though, spreading it out over 20 to 30 minutes.  You can't imagine how fascinating it is to watch the little timer and give another 1.0cc every 30 seconds — slightly better than watching paint dry.

The mannitol is followed with another diuretic, and is repeated at six to eight hour intervals if necessary.

Unfortunately, I was too swamped to get a picture when Junior went home today.  It took him a couple of days to remember who he was and how to eat, but he's doing pretty well now.

"Will he have brain damage, Doc?"  "With your dog, I'm not sure we'll be able to tell a difference."  And get a fence.

One thought on “Head Trauma”