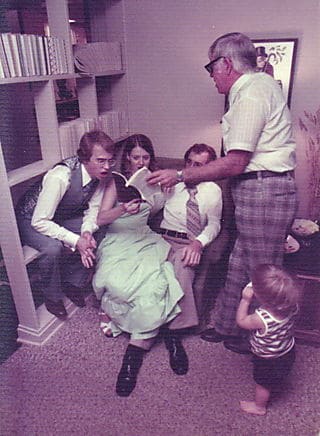 This is a picture taken at my wedding reception (in 1976, and Libby is still putting up with me…mostly).  The man on the right is Virgil McElyea, known to his friends as "Mac".  We were woodshedding some gospel tunes while the cake and punch were going around.

Mac passed away about two weeks ago at the tender age of 86.  Today I had the privilege of singing in a gospel quartet at his memorial service.  He was a versatile musician, a poet, a composer of songs, a humorist, a performer… in short, an artist, in the best sense of the word.   Art is what elevates mere existence into life.  The music today was a celebration of his life, a joy to sing and to hear, not the generic "funeral music" we're accustomed to.

I'm not qualified to write his obituary, but I am qualified to pay my respects. Mac and I collaborated in some music and theater projects and we were connected by ties of friends and family.  I recall him saying to me once, "It may not be such a great thing, being a piano tuner, but I've had a good life."

Winston Churchill said, "We make a living by what we get, we make a life by what we give."  By that standard, I'd say Mac's life was better than just good.  He will be missed.

One thought on “Rest in peace, Mac.”