Why do dogs swallow needles?  As Sir Edmund Hillary said about Everest, “…because it’s there.”  Oddly enough, if they actually get a needle or pin swallowed, more often than not, it just passes on through and comes out in the stool.  Under most (NOT ALL) circumstances, the intestinal tract recoils from those sharp points and the needle just eases on through.   This does not mean you should ignore an occurrence of needle eating.  The needle can certainly lodge in other places, can perforate the gut, and can do a great deal of damage as it travels through.  You should definitely consult your veterinarian if you know your pet has eaten a needle.

Oddly enough, the situation is usually worse if a thread is attached.  In fact, a wad of thread by itself can be a problem.  One end gets caught, the thread is now a “linear foreign body”, and the intestine bunches up on it like the waistband of a pair of sweatpants.  The string then saws through the folds, causing multiple holes in the gut, which is VERY bad.  This is called a plicating (folding) foreign body. 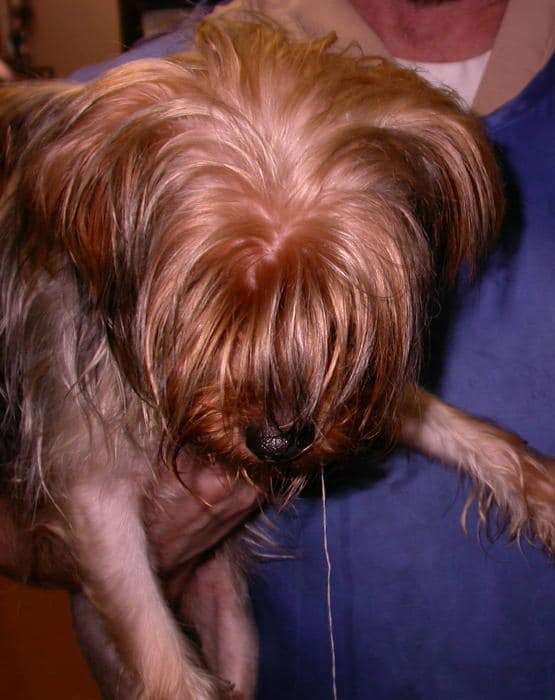 That’s why seeing this dog who had swallowed a needle had me more worried than usual.  The dog is saying, “Thread?  What thread?  I don’t see a thread.  Do you see a thread?”  Like his owner, he’s just worried about the needle. 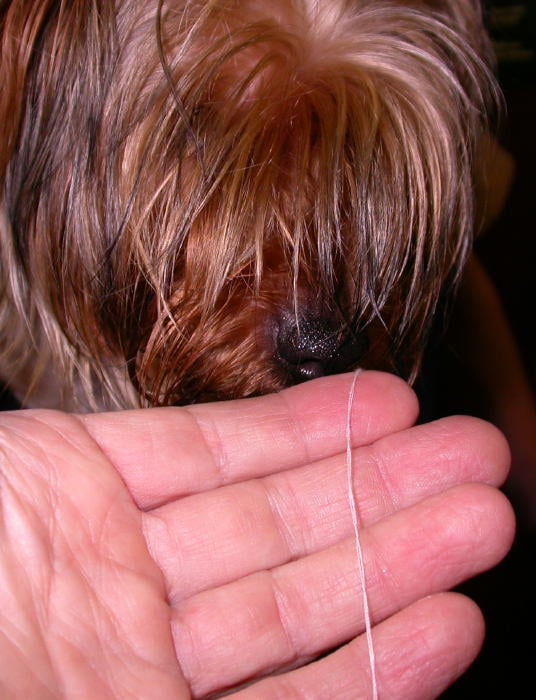 This thread right here.  Now the owner knew he had grabbed up her quilting needle, because A. it wasn’t where she left it, and B.  here is the thread she was using, hanging out of the dog’s mouth.  Hey, why don’t we just pull on it and get the needle out?  Reason #1:  If we break the thread, we’ve lost our handle that will help us find it.  Remember Theseus and Ariadne in the labyrinth?  (No?  Better google it, then.)    Reason #2: It might be really painful for the patient. 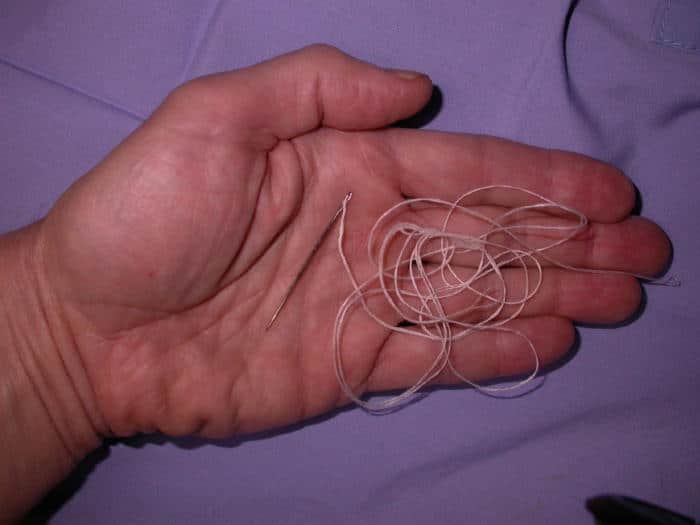 First we took a whole-body X-ray and found that the needle was in the head “somewhere”.  That’s why we anesthetized our curious friend to look for it.  Fortunately (for me) I could see the eye at the back of the palate (roof of the mouth).  It was also fortunate that I didn’t pull on the thread much.  The needle point was directed straight up behind the eye (about an inch deep). Ouch!

We sent him home with a little pain medicine and antibiotics and he’ll be fine.

One thought on “Dogs swallow needles.”